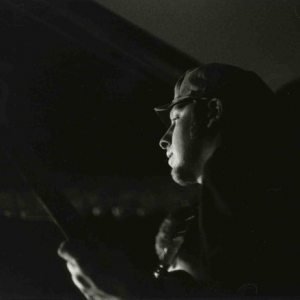 “This is a natural state for me” says O’Brien, sitting in his kitchen, casually playing bass. “For me the road was always leading to music.”

O’Brien started playing bass when he was 19. He grew up St. Paul, in a house filled with an eclectic collection of music. O’Brien’s father, an avant-garde leaning trumpet player, provided a varied foundation.

“My dad was way off into free jazz, listening to Bill Dixon, Cecil Taylor, Kenny Wheeler, and of course Coltrane and Miles Davis, so there was that,” says O’Brien, ticking off influential jazz heavyweights as though they’re old pals. “And then there’d be Michael Jackson. Thriller would always be around, for instance. And he’d  buy hip-hop recordings like Run-D.M.C..”

O’Brien has a connection to music that makes it seem as if it’s part of his physicality. Even as he relaxes, bass guitar in hand, he is tweaking his notes to match the rhythm of his speech.

“I was really lucky to listen to, and get my hands on, such a wide range of music,” O’Brien says. “And then to grow up in the golden era of hip hop—where sampling was still so new that the law hadn’t caught up to it yet. We were just looking through this stuff trying to see where it all came from. I got into Parliament, Bootsy Collins and Average White Band that way—because of listening to this hodge-podge of music. I grew up listening to virtually everything, so when someone now says, ‘Hey man, you wanna do that?’ I say, ‘Yeah, I do.’”

O’Brien has furthered his musical education through tutelage under Anthony Cox, a jazz instructor of upright bass, and Jim Anton, who teaches electric bass. This instruction, paired with O’Brien’s expansive musical range, has given him the versatile latitude to delve into a multitude of projects.

In the past, O’Brien has appeared on recordings and released remixes with Twin Cities hip-hop greats Eyedea and Kristoff Krane, as well as No Bird Sing, Adam Svec, Carnage, TD Mischke, and Face Candy. O’Brien’s most recent film work includes the score for The Place Where We Were Born by Minnesota Book Award Winner, Kao Kalia Yang, and its composition places him on the opposite end of the spectrum.

Presently, O’Brien is the house bass player for the Soul and R&B label Secret Stash and leads various jazz and R&B ensembles based in the Twin Cities; frequent collaborators include Graham O’Brien, JT Bates, Nathan Hanson, Davu Seru, and John Keston. He has also performed nationally and internationally with Eyedea, Sonny Knight & The Lakers, PaviElle and Mina Moore.

This fall, O’Brien began recording for his debut solo record—and if O’Brien’s musical heritage has anything to do with it, it’s sure to be an album that ignores convention.

“It’s just part of my life… It’s everyday stuff,” says O’Brien on making music. “I like having that all in my life.”

Want to join the discussion?
Feel free to contribute!

This site uses Akismet to reduce spam. Learn how your comment data is processed.